The cold weather has made us stay indoors most of the time this weekend, so I thought it would be a good idea to create something for the kids to keep them occupied. We went to a store that sell building supplies, and they gave us some leftover mdf. Then we went to my parents and did some sawing and hammering in their basement, and then we went home to finish it. We made a roombox for two small Steiff teddy bears! I painted the floor and ceiling white, and Noah painted the outside. He chose light pink. 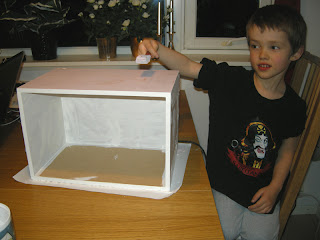 He also got to choose the wallpaper... 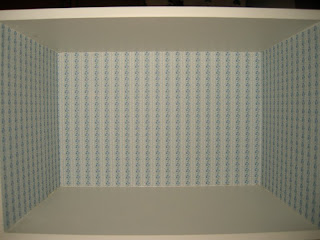 We then put up a wall inside it, and added some minis. Some of these are Noah`s and I let them borrow something of mine as well. 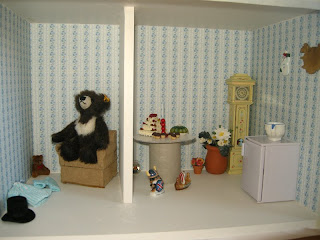 They especially liked the opening fridge from Elf miniatures. Noah made the cupcakes on the table, and he bought the wedding cake from Christel at the local dollhouse show last year. She gave him the green cake as a gift! He also bought the knitted clothes at the show, and was given some of the other items as a gift from some of the vendors there.
By Mimmi kl. 18:24